If you need to create large brackets that span multiple staves, using the default fonts may not be a good idea as they look too bold at that size:

So you either need to create your own bracket shapes with Finale's Shape Designer, use vertical slurs or 3rd party fonts. Here are some font recommendations for thin large brackets:

in our Elbsound Text Fonts Package which includes 450 text fonts selected especially for use in musical scores.

The two XITS Math brackets above are the most flexible brackets and can be scaled to any size and thickness.
They are built of multiple elements: one at the top, one or several in the middle and one at the bottom.
Make sure to reduce the line spacing when building the expression, otherwise you will see gaps between the elements (see image 3).
If you use the curly middle element, add a some space before the other elements, otherwise they won't align.
A Finale library with two XITS Math brackets can be downloaded here (the free XITS Math font must be installed!).

If you're looking for alternative text fonts with thin large brackets, search for fonts with the tags condensed, ultra light, tall, thin or hairline.

The last bracket in the image 2 is a vertical Finale slur. Better use them with caution as they behave differently from expressions or articulations and are sometimes a bit awkward to assign to note clusters.
If you prefer the slur or even the piano brace look, you can also use Finale's Shape Designer and add the curves, slurs or brackets as scalable vector elements (Image 4). 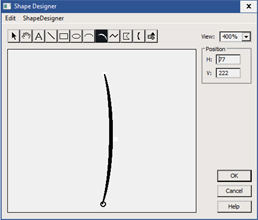 These fonts are available for free:
Links to all fonts can be found on our Music Font Links page.

Large square brackets can be easily created with Finale's custom line tool (Image 5).
You can adjust the thickness and hook lengths in the dialog, and the size when placing the bracket on the score.
Small square brackets (e.g. for string double stop markings) are also available in Finale's EngraverFontSet font.

The same problem exists with large piano brackets.
When taken from standard text fonts like Times New Roman, they look too bold.
It's recommended to use the symbol 0xE000 from SMuFl fonts (Image 6).
Or take the symbol from some old music fonts as listed in the Catalog of Hard-to-Find Music Symbols.

in our Elbsound Music Fonts Package which includes 214 music fonts.

Image 7: Square brackets in EngraverFontSet
Lots of square brackets can be found in the FPBracket and FPBracketBold fonts from Bill Duncan's Finale Productivity Pack.

Some medium to large-sized square brackets can also be found in the Figurato font included in the Elbsound Music Fonts Package.

Image 9: Examples of square brackets in Figurato
As far as we know Figurato is the only music font that also includes standard accidentals plus accidentals with both square and round brackets. Unfortunately its metrics aren't compatible with Maestro, so it might need a JW Lua script or some manual adjustments to get the accidentals to work in Finale.

Image 10: Accidentals with Figurato
Figurato is also included in our

in our Elbsound Music Fonts Package.