The Realbook Look Plug-in for Finale®

The Realbook Look plug-in turns a standard Finale document into the typical Realbook look with just "one click".
The plug-in is not available commercially yet, this is only a demo.
The following screenshots were taken after applying the plug-in with its default settings. 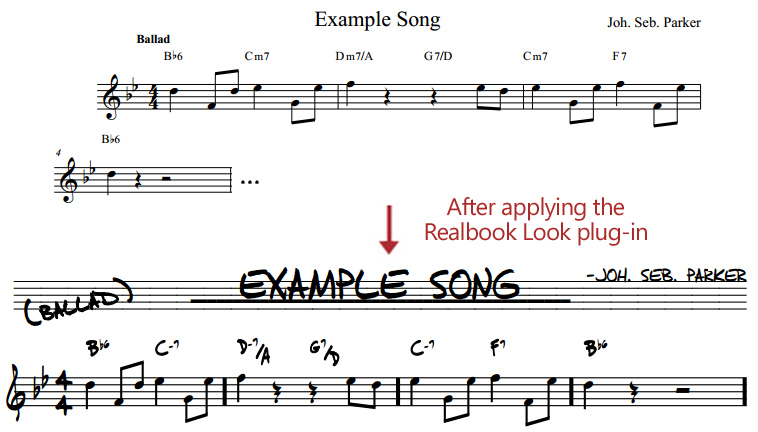 Features of the Realbook Look plug-in:

1.) Texts/Lyrics
2.) Authentic Handwritten Look
3.) Manuscript Paper Style
4.) Automatic Measure Layout and Proportional Spacing
5.) Chord Symbols
6.) Other Symbols
7.) Screencam Video
8.) System Requirements 1.) Texts / Lyrics
- The title gets a thick underline and all text/lyrics blocks are converted to a handwritten font
- The main music style mark is rotated diagonally, put in parentheses and moved upwards upon the top staff lines.
- All texts are being capitalized.
- The composer name is preceded by a "-" symbol.

2.) Authentic Handwritten Look
- Noteheads and accidentals are taken randomly from all installed similar jazz fonts.
- The stem length, the notehead size and the stem connections are varied randomly too.
- The noteheads are slightly oversize (font size 25-27 instead of 24).
This guarantees a more realistic handwritten look compared to just using one jazz font in one size.

3.) Manuscript Paper Style
- Staff lines are added to fill up the page.
- Page and system margins and scaling are adjusted automatically.
- Number of systems per page is adjustable for staves with lyrics and without.

4.) Automatic Measure Layout and Proportional Spacing
- The measures get proportional spacing: i.e. all measures will have nearly the same width.
The idea of proportional spacing is to enable jazz players during improvisation to capture the harmonic proceedings at first sight and to not get lost.
- Automatic detection of the musical environment (12-bar blues scheme / 8-bar jazz patterns, pick-up measures, introduction measures, repeat brackets, double barlines, etc) for an optimal 2, 3, 4 or 5 measures per line layout (typically 4).
- Adaptive proportional spacing takes into account the crowdedness of a measure for minor deviations of the proportional spacing. This is for example required for "5-measures per line" or very crowded measures.
For example, measure 1 and 3 usually require slightly more space than measure 2 and 4 in an 8-bar jazz standard.

Using an equal proportional spacing usually makes the measures in a typical 8-bar jazz standard look unbalanced. Here is an example of adaptive proportional spacing calculated from the number and duration of notes and rests in the measure columns in such an 8-bar standard. The first and third column are 16% wider than the second and fourth. 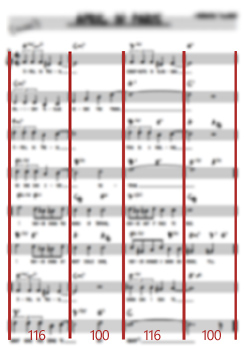 - A "Fine" marking can be automatically added. This is especially useful for marking an end in the middle of a system.

7.) Screencam video 2 of the plug-in output in Finale (external link on Youtube): 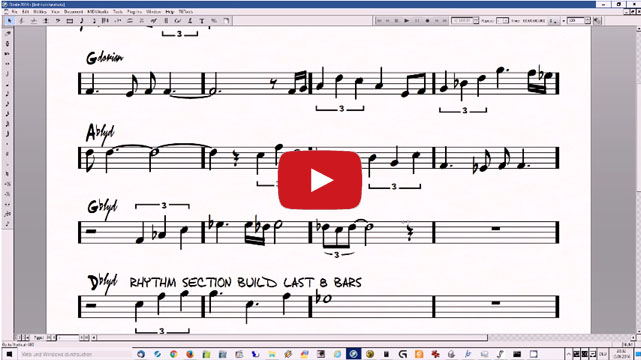 Required Fonts:
Recommended Chord Font:
Jochen Pietsch's RealBook Chords font with Xtreem Fat Demo for missing chord suffices.
(for the New Real Book look there is also a "New Real Book Chords" font).
Recommended Text Fonts:
The example above uses the text font j.d. Other handwritten fonts that work fine are Pea Missy with a Marker, Permanent Marker, festus!, Real Book Title, LilyJAZZText or Finale's own Jazz Text Extended and Finale Copyist.
Recommended Music Fonts: The more jazz fonts are installed on the system, the more variations in the handwritten style are possible. But this is an optional feature, so it's also possible to only use Finale's own Jazz or Broadway Copyist font.

Availability of the plug-in:
not known yet (dependent on further updates of JW Lua - unfortunately there have been no JW Lua update since 2017)