Abraham Lee, the man behind Music Type Foundry and designer of the fonts, finally reworked his fonts that he had originally released for LilyPond. Some some new glyphs were added, some symbols revised, the glyph map and metrics were transformed for Finale's settings and an accompanying document options library and font annotation files were included.

As an example I tested Abraham's new "MTF-Beethoven-Fin" font in Finale 2014.5/Windows 10 and compared it with the free BetvnFIN font for Finale which uses more or less the same glyph set from his original LilyPond release. and which is included in the Elbsound Music Font Package. The latest Windows release (v1.1) of the BetvnFIN font can be downloaded here for free.
The Elbsound font package still includes the v1.0 Mac/Windows version.

First, to make MTF-Beethoven-Fin work in Finale you must load the supplied document options library or update some doc options manually, otherwise the flags will get messed up:

That means on one hand that many of your own documention settings will always be overwritten when loading the library: for example repeat, multi-measure rest, clef and time signature settings (see the blue marks in image below).
On the other hand the document options library includes some very nice optimizations like new tuplet and text fonts, better barline and stem settings (wider lines).
To overcome this dilemma, Abraham also included a text document with his recommended document settings for ties, slurs, beams, barlines, tuplets and lines: so if you update these values manually, you will not overwrite the other document options and get an optimized look.

The document options library had not been cleared before its creation and includes a few inconsistencies:
For example, the supplied Libre Bodoni text font is not included in the font settings at all and some notation elements are still kept in Maestro style (e.g. "Time (Parts)").
The tuplet font is set to "Academico" which is usually not installed under Windows (it's only supplied with Steinberg's Dorico). So you may get some questions about fonts missing - e.g. when using MTF-Beethoven-Fin it asks for MTF-Arnold-Fin: 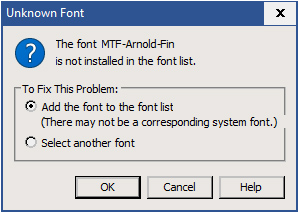 The MTF-Beethoven package comes with the Finale and a new LilyPond font version of the Beethoven font, a piano brace font and the SIL OFL Libre Bodoni font for text.
The MTF-Beethoven-Fin font is included in TTF format only, while the other fonts come in OTF only.
The package doesn't include a font sampler or demo pages, but those are available for download on github.
The supplied Finale font annotation files were created with Finale 2014.5/Windows.

Here is an all symbols comparison of Maestro and MTF-Beethoven-Fin with the new doc options library loaded.
I counted 36 minor or major differences in the glyphs:
some glyphs are missing, some glyphs are mixed up in the character map, some have different metrics and/or overlappings and some are cut off. All major glyph differences to Maestro are marked red, all updated doc options that might be disturbing are marked blue:
*: The reduced size of the clefs in MTF-Beethoven-Fin is not a problem of the font, but of the loaded doc options library. Download MTF-Beethoven-Fin image in higher resolution
Download as PDFs

And the same comparison again now with Maestro and the free BetvnFIN font.
All Maestro glyphs are available in BetvnFIN and no document options need to be updated.

A screen cam video of the test above in Finale 2014.5/Windows.

Here is another scenario:
An optimized document created with Maestro is changed with "Set Default Music Font" to MTF-Beethoven-Fin and to BetvnFIN. For MTF-Beethoven-Fin also the doc options library was loaded.
While BetvnFIN keeps the music spacing and only updates the font symbols, MTF-Beethoven-Fin changes the spacing, some vertical distances, as well as some beam, stem, slur and barline settings.
Download this scenario as PDF (higher resolution and more images)

For the price of $39,00 USD one doesn't have much benefit over the free BetvnFIN font - and unfortunately more than 30 glyphs are missing or buggy. I found the new document options library very interesting, but had hoped to get more new glyphs than in the the free original version and not less.
Not even all glyphs from the LilyPond version were converted to the Finale version (for example the percussion notehead section is very incomplete). It would also be nice if the Finale font version included new symbols in its remaining free slots.
Abraham Lee and his Music Type Foundry have already promised to work on these problems and release an update soon.