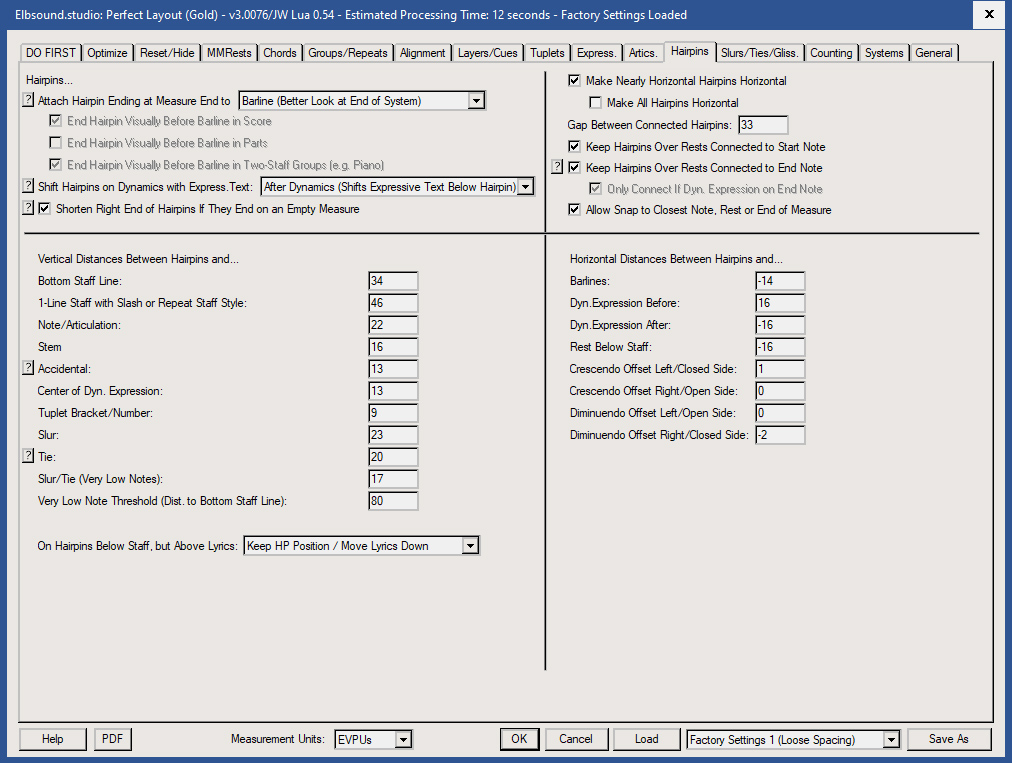 The hairpin settings in the Silver edition are on the Alignment and the Optimize tab.
Previous Tab
Next Tab

The Perfect Layout plug-in differentiates between the actual end connection of a "hairpin over the barline" and the visual connection.
You can select a connection a) to measure position 0 in the next measure or
b) to the end of the previous measure.

Solution a) is optimized for playback, but has the drawback that hairpins over systems can't be separated from the end of system barline.
Solution b) is visually optimized, but doesn't work fully optimized with Finale's cresc./diminuendo playback.

In solution b) the hairpins ALWAYS end before the barline.
If solution a) is selected, it's possible to specify where the hairpins should visually end: to avoid/allow collisions with the barline.
This selection can be made for the parts, for the score and for piano (two staff) groups. 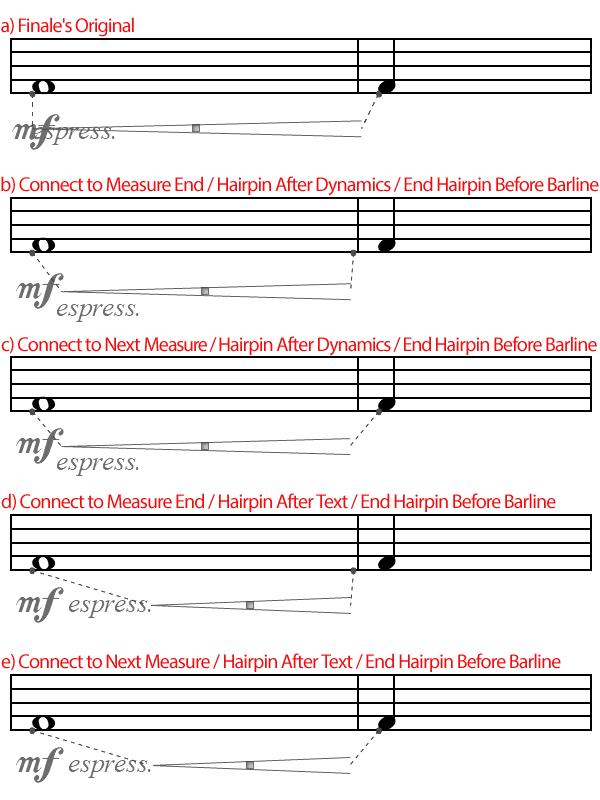 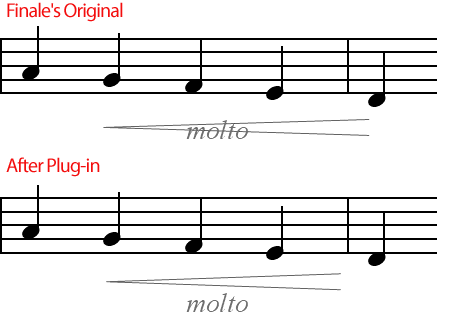 If hairpins are connected on a measure position, you can specify the gap between them (Option: "Gap Between Connected Hairpins").

Image 4: A gap between connected or overlapping hairpins is automatically inserted (width: 33 EVPU by default)
(Note: the niente circle has been automatically shifted to the end of the note)

If a hairpin is connected over a rest to an end note, it's possible to keep it or to have it reduced to the end of the previous note (see image 5).
It's also possible to only keep it, if it is connected to a final dynamic expression (image 5c).
The same option is available for start notes. 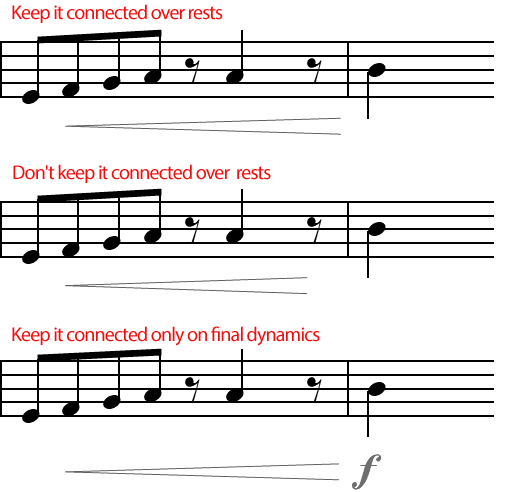 Image 5: Hairpins and rests at the end

The automatic connection of expontential and niente expressions with hairpins is supported.

For niente hairpins create an expression in the Dynamics category and use an O, 0, o, ° from a text font or an 0 or o from any of the supported music fonts as the symbol. Make sure to activate the "Enclosure" property. You don't need to fine-tune the enclosure - the plug-in will do this for you. Unfortunately JW Lua doesn't allow the activation of the Enclosure field, so this needs to be done manually. If you use PL v3 and RGP Lua, the enclosure will be created automatically.
The opaque enclosure is required to make sure that there is no tip of the hairpin visible after the niente.
Instead of the "o" symbol you can also use the music symbol "n" or the text "niente" or "quasi niente".

For exponential hairpins the symbols from the November2, VintageGHMA, VintageECP1 and the DSE Music Symbols fonts are supported. PL v3 also supports Opus Special, Opus Special Std and Norfolk Special Std.
Again create an expression with these symbols and place it in the Dynamics category.
Don't activate the "Enclosure" property for exponential expressions!

This video shows how it looks in the score:
Video: Exponential and Niente Hairpins
Close

In standard notation hairpins usually end at the last note or rest before the empty measure.
In contemporary notation however there may be situations where hairpins should occur in "empty" measures, especially if it's a graphical or other note-less notation. In this case you should uncheck "Shorten Right End of Hairpins If They End On An Empty Measure".
In the Silver Edition this option is on the "Alignment" tab.

Image 6: Option "Shorten Right End of Hairpins If They End on an Empty Measure"

The exact start and end offset of an hairpin on a note or a rest is automatically calculated by the plug-in (see image 7).


Image 7: Hairpin start and end points after applying the plug-in (with end hairpin before barline option)

If the start/end of the hairpin is further away from the next note, it depends on the context whether the plug-in snaps the hairpin to the closest note. Only if the plug-in is sure that this is what was originally intended and if "Allow Snap To Closest Note, Rest or End of Measure" is checked, then it might snap.
The plug-in takes into account the horizontal distance between the objects, dynamics and also hairpins on other staves in the same measure, so that, if possible, all hairpin are treated equally.
In doubt the hairpin will not be changed. So when entering the hairpin, it is best to not create ambiguous layouts as in image 8.

Image 8: Where should the hairpin end on the left image? On beat 3, 4 or even on beat 1 of the next measure?
On the right image it's obvious.

Note: Finale has a problem with the end of the closed side of a hairpin on screen which doesn't match the end position of the hairpin in print (PDF or paper). The plug-in takes this into account and always calculates the offsets for print only. I.e. should there still be a collision of a hairpin with a dynamic on-screen, do a print to PDF or paper first to check if it isn't that bug.
Only in very rare cases the plug-in doesn't solve this bug.

Many distances for optimized hairpin placement can be set. While most options are self-explaining, a few need a note:
a) the vertical position of a hairpin in relation to a connected dynamic is set in "Center of Dyn. Expression" (13 EVPU by default on a hairpin opening width of 28 EVPU).

b) On very low notes it's possible to have hairpins closer to slurs and ties to save space (Option: "Slur/Tie (Very Low Notes)").
The threshold for very low notes is set in the field below ("Very Low Note Threshold", 80 EVPU by default, i.e. ca. 3 ledger lines below the staff).

Image 10: Hairpins on very low notes can have smaller distances