Perfect Layout v2.1 includes nearly 50 new features, improvements and fixes compared to the last v2.031 release.
v2.0 customers and customers who bought the full version of Perfect Layout v1.x after the 27th of March 2020 are eligible for a free update. For all other users the update is available through our online shop.
Please read our FAQ on how to install the update, especially on Windows.

-New option "Align Compound Dynamics (molto f, poco f, più f)" with three selectable options "Align to the Center of Dynamics Symbol", "Align to the Center of the Full Expression" and "Align Flexible".
In previous versions the "poco f" placement style was to always center the dynamics symbol below the note and to put the "poco" text before (regardless of collisions with barlines). However this placement style is not recommended by Gould in "Behind Bars" as it may lead to an ambiguous start of the expression. But as this was common in practice in previous centuries, we have now added this option. 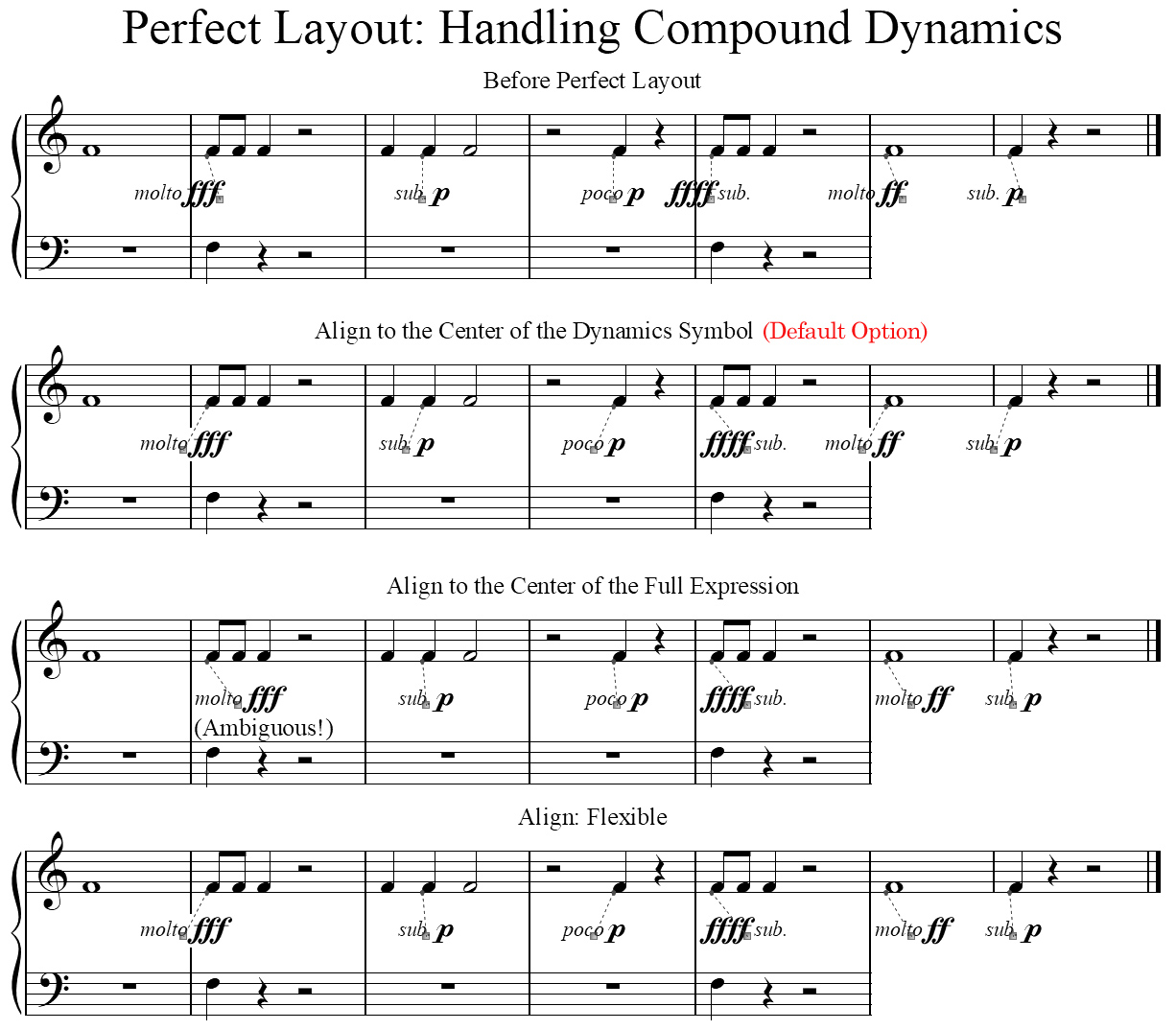 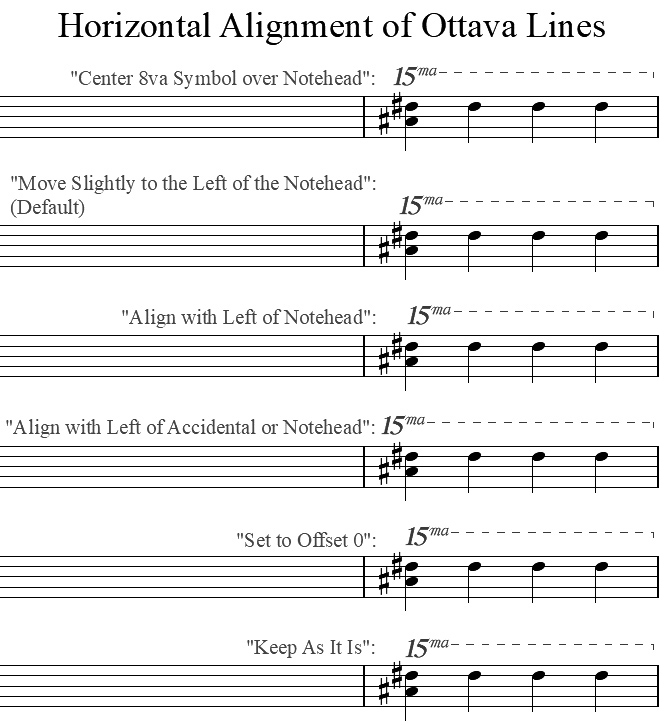 -New option "Left-Align Lines with Accidentals Instead of Notes" added

-Gold version only: new feature "Shift Tuplet Numbers Onto Staff If No Brackets (Deactivates 'Avoid Staff')" added. Deactivated by default (and so it's also deactived in the Silver version)


Improved:
-Slightly improved processing speed (on large documents only)
-Rewritten compound dynamics handling (e.g. poco f, molto f, pp sub.): more options and better placement
-Improved and faster detection of compound dynamics (e.g. molto f or ppp il più piano possible), any texts are now supported
-Improved metrics calculation on small enclosures of fonts with huge ascenders/descenders (e.g. Maestro)
-Improved metrics calculation on non-rectangle enclosures
-Improved vertical placement of ottava and custom smart shapes
-Improved metrics for custom smart lines where the initial left text has a horizontal offset
-Improved vertical placement of "up bow" articulations at the end of a tie or a slur (slightly closer to the slur)
-Improved detection of movement names as page texts on documents with many empty pages
-Initialization time on Windows reduced by up to one second
-Added LS Iris to the list of known music fonts
-Dynamics above the staff on resized lyrics staves are not repositioned anymore.
-A few improvements to tie/articulation collision removal
-A few improvements to slur/articulation collision removal
-"Clear Manual Slur Adjustments" algorithm has been improved: adjusted slurs on grace notes (which occur often) are not reset anymore.
-Improved placement of technique expressions over custom lines
-A few user dialog and translation improvements
-Improved Spanish translation
-Improved installation dialogs
-More preview images
-If "Optimize Tuplet Settings" and "Shift Tuplet Numbers Onto Staff If No Brackets" are activated, then the default value for vertical tuplet distance is set to 24 EVPU (was: 28 EVPU in previous versions).
-Dynamics on time signatures with more than 32768 EDUs (i.e. more than 32 quarter notes) are now better supported.
-Dynamics on long grace note passages are now kept on the grace note and not moved to the first non-grace note anymore (see Gould, Behind Bars, page 131)
-On invisible bars (no staff lines, no notes, no time signatures) repeat texts, expressions with coda symbols or rehearsal/tempo mark expressions below the top staff line are not moved anymore above the staff.
-Improved algorithm for drum pattern recognition for starting slash measure counting ranges with 2 instead of 1, if the previous measure started with a pattern and a double bar.
-Improved algorithm for vertical hairpin/dynamics (non-)alignment on systems
-On two "connected" hairpins on a note the gap now uses a better centering algorithm, if the gap value is much higher than the notehead width.
-Improved detection for the automatic activation of the "Always (Re-)Apply Music Spacing" option
-More flexible horizontal positioning of measure counting expressions in case of collisions
-Added more music fonts to the list of known music fonts and more text fonts to the list of known text fonts
-Improved barline detection between staves on groups with partially hidden staves
-Better support for a single tablature notation staff with 4, 5 or 6 staff lines (instead of multieple single line tablature staves)
-Number+X expressions in the first measure of a system (e.g. "3x" for playing the repeated pattern three times) are not put at the beginning of a system anymore, but kept at their horizontal position.


Fixed:
-When loading the "Deactivate All" preset, the measure number placement was not set to "Keep current position". Fixed now.
-If "Clear Individual Measure Number Positions" was manually deactivated in very rare cases of multi-measure ranges and hidden measure numbers within the same measure number region, the measure number was sometimes shown although it was manually hidden before. Fixed now.
-If "Align Page Bottom Margin with: Bottom Staff Line" and "Optimize System Distances Only and Keep Staff Distances" were both selected (these are both not the default settings), then "Align Page Bottom Margin with: Lowest Element On Staff" was performed instead. Fixed now.
-If "Optimize System Distances Only and Keep Staff Distances" was selected, then on extracted parts or single staff scores an error message could appear. Fixed now.
-In rare cases on bars with slash staff styles and composite time signatures containing no notes an error message could occur. Fixed now.
-MacOS: in the installer umlauts and accents on lower case letters in the registration name do not lead to disappearing letters anymore