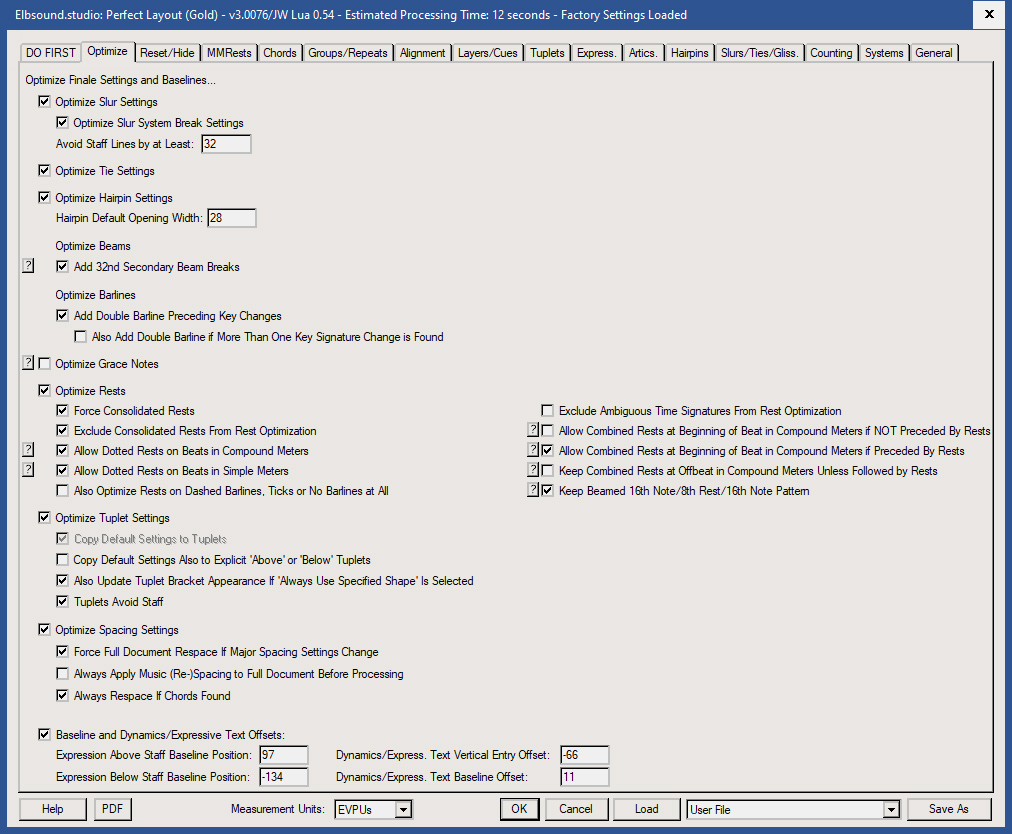 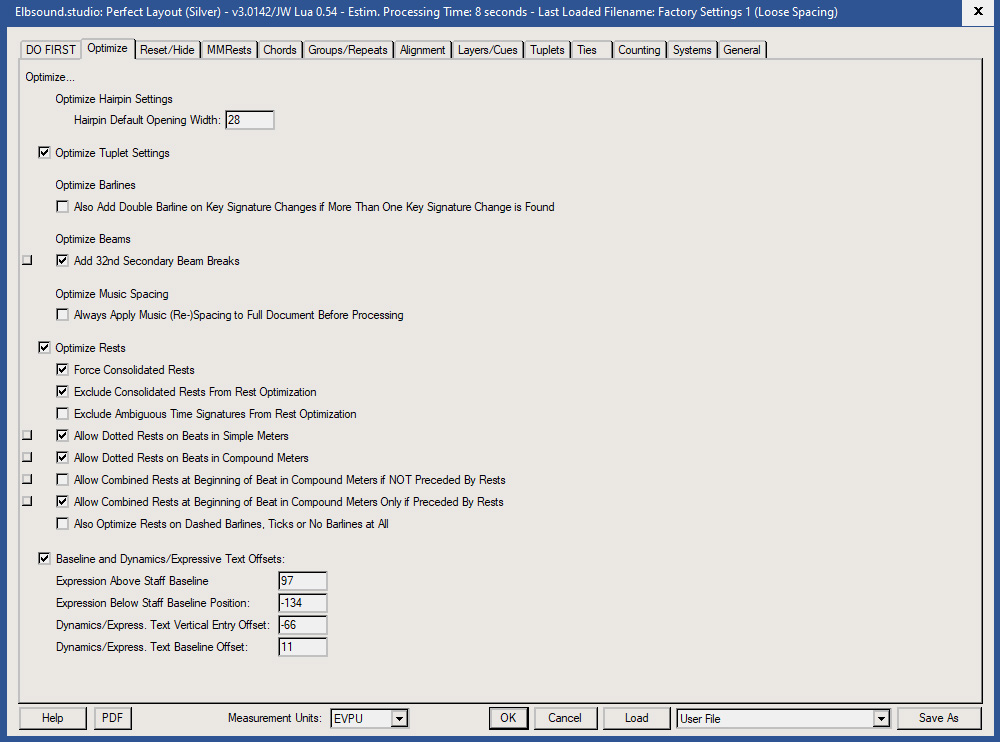 In the "Optimize" section you can select which document options should be changed to the plug-in's optimized values.
The plug-in can update Finale's settings for slurs, ties, hairpins, tuplets and spacing.
Slur values are only updated in the Smart Shape Options menu, not in the Placement or Contour menu.
These values are hard-coded in the plug-in and result from many years of Finale® expertise.
Still it's possible that they don't fit your personal needs, so you can switch off these settings individually. As JW Lua doesn't allow slur modification, it's also possible that some slurs still have little collisions with notes as there are no all-purpose settings for slurs.

For better quality the plug-in will also set the Curves Resolution to 127 (from Document Options->Lines and Curves).
The "Double barline preceding key changes" feature will also be enabled automatically.
It's currently not implemented to switch off these features.

The default placement for tuplets is the stem side.
But there are situations where it makes more sense to place them via the "Above" or "Below" method.
In order not to overwrite these above/below tuplets with the default settings, the option "Copy Default Settings Also on Explicit 'Above' or 'Below' Tuplets" is unchecked by default.

The "Optimize Rests" option enables the algorithm for better rest splitting (e.g. dotted quarter in 6/8, etc.). In scores Perfect Layout also analyzes other staves to detect for example if a 5/4 time signature is split to 2+3 or 3+2.
If many alternating, complex or ambiguous time signatures are used, it is also possible to turn off "Optimize Rests".
Consolidated rests (i.e. rests in multiple layers that are merged to one visible rest) are by default excluded from the rest optimization algorithm (Option: "Exclude Consolidated Rests from Rest Optimization").
The "Force consolidated rests" option creates consolidated rests if non-consolidated rests are in the score. This is especially interesting on MusicXML imported documents as they don't conserve Finale's consolidated rests feature. If the plug-in detects a MusicXML imported document, this feature is automatically activated in the user dialog and needs to be deactivated manually, if unwanted.

Image 1: Allow Combined Rests at Beginning of Beat in Compound Meters if Preceded by Rests

Image 2: Allow Combined Rests at Beginning of Beat in Compound Meters if NOT Preceded by Rests

Image 3: Keep Combined Rests at Offbeat in Compound Meter Unless Followed By Rests
(Note: this option doesn't combine rests, but only keeps already combined rests if these were manually created by the user)

In the spacing section you can also select when a full document (re-)spacing has to take place.
You can force a full respacing by checking "Always Apply Music (Re-)Spacing to Full Document Before Processing".
This option makes sense if the part layout is still "raw" and multi-measure rests haven't been created either.
If you have applied music spacing to the document or if "Automatic Music Spacing" in Finale's preferences had been switched on (it must be switched off before running the plugin! See here), you don't need to check this option.
By default it's unchecked.

If chord symbols are found and there is at least one measure with three chords or an overlapping of chords is very likely (e.g. chords at end of measure or wide chord suffices), a (re-)spacing is always performed, when the option "Always Respace If Chords Found" is selected.

When the spacing settings are optimized, a (Re-)spacing is only applied to the document if "Force Full Document Respace If Major Spacing Settings Change" is checked.
It is selected by default.

Other situations where the spacing may change are described in the overview.

This will update the placement and alignment of all existing expressions. Expressions from other categories will be corrected, so that they stay at the original position.
While the "Below Staff Baseline Position" affects expressive text and dynamics expressions, the "Above Staff Baseline" mainly affects tempo marks, rehearsal marks and tempo alterations.

For the Perfect Layout plugin the baseline always means the closest position to the staff line. If there is a collision, the expression will be horizontally or vertically shifted, but never closer to the staff.
There is only one exception: dynamics are shifted slightly closer to the staff, if the "Shift Dyn. Expressions Up If Lowest Element is Staff Line" is selected in the "Express." tab.